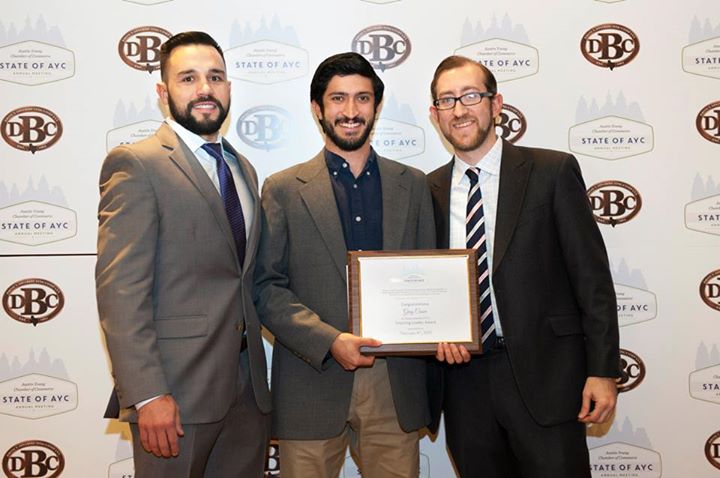 Austin –  The Austin Young Chamber of Commerce has spent their first five years focused on bettering the community and providing personal and professional development for their members and the young professionals of Austin. This year, at their Second Annual State Of AYC Luncheon, AYC will honor newly elected council member Gregorio “Greg” Casar and award him the Inspiring Leader Award.

“Council member Casar embodies the type of leader we strive to empower,” Executive Director Matt Glazer said. “We are honored to share this day with him and celebrate his leadership.”

The State of AYC is an annual event focused on sharing the Young Chamber’s vision for the year ahead, new programs and partnerships, and celebrates our success in previous years. This year, AYC will continue the tradition of honoring members of the community as they work to improve the capacity of young professionals in Austin.

“We have a historic opportunity to make Austin a great, friendly, and affordable place to live for both current and future generations. I believe that by working with dedicated groups like the Austin Young Chamber of Commerce, we can move our city forward on civic engagement, education, transportation, and shared prosperity. Our generation has a great stake in this city, so we must make our voices heard in our government,” said Council member Greg Casar

Last year’s honoree was Heather McKissick. McKissick serves at University Federal Credit Union as the Vice-President of Human Resources and Organizational Development. Before that she was the President and CEO of Leadership Austin for over 5 years. McKissick was awarded the inaugural Inspiring Leader Award because of her work, mentorship, and devotion to empowering young leaders throughout Austin for over a decade.

“When we selected Heather McKissick, we set a very high bar for future honorees. Council member Casar is a passionate leader who has shown that setting a high standard for inspiring leaders only means that Austinites will rise to that challenge. We look forward to hearing from him on February 6th and honoring his dedication and vision for Austin,” AYC Board Member, Treasurer and Committee Chair Emmy Hill said.

Gregorio “Greg” Casar is a native Texan, the son of Mexican immigrants, and a newly elected Austin City Council Member representing District 4. After graduating from the University of Virginia, Greg became the Political Director at Workers Defense Project, where he spearheaded campaigns that won major policy reforms to improve wages, education, and workplace safety across Austin, garnering national attention. Greg was elected to the City Council in 2014 by a landslide, in what the Statesman called the most carefully watched Council race in the 2014 cycle. At age 25, he is the youngest Council Member in Austin’s history and the new District 4’s first-ever direct representative.

The Austin Young Chamber of Commerce is a 501c6 membership organization. Over 1,200 people take part in AYC’s programs throughout the year. Members are involved in volunteerism, arts & culture, and engaging in economic development and growth within Austin. AYC’s primary purpose is to identify and engage the next generation of Austin leaders.