The Austin Young Chamber would like to recognize and pay tribute to this year’s ChangeMaker finalists. The ChangeMaker Awards, presented by UFCU, are part of the 5th Annual ChangeMaker Luncheon on February 16, 2018. This year’s nine finalists are inspiring leaders who have a passion for dedicating time and talent to successfully make a difference in our community. Throughout the weeks to come, we will honor these individuals one at a time. 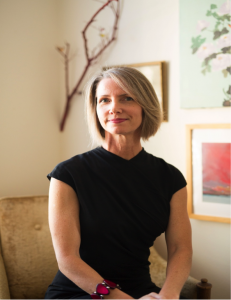 For eight years as a volunteer for Austin nonprofit Truth Be Told, Katie Ford has helped women incarcerated at a prison in Lockhart write their stories. Specifically, she guides them through a process in which the women identify and write about the life experiences and personal choices they believe set them on a path to prison. After years of listening to repeated accounts of physical and sexual abuse and domestic violence in the women’s stories, Katie felt called to revise her own life story.

In the fall of 2016, she left behind her journalism career to work toward reimagining the criminal justice system and what “corrections” could be for the women she serves in Lockhart and for the more than 200,000 incarcerated women nationwide — 70 percent of which are mothers.

With a vision of bringing more trauma-informed, gender-specific programs to women in prison and building better support systems for women re-integrating into society after incarceration, Katie singlehandedly raised $44,000 to support herself as she launched the first and only trauma education course at Lockhart Correctional in July 2017. Moreover, in August 2017, she stepped up to serve as the part-time executive director of Truth Be Told. Her vision is to merge these two efforts and position Truth Be Told as a thought leader in the national conversation about mass incarceration and reimagining justice. She aims to scale Truth Be Told’s operations to reach more justice-involved women in Texas — and eventually in other states.

Katie says if our correctional system truly wants to correct the lives of the human beings it houses in the name of public safety, it must abandon its dehumanizing, punitive model and become an institution that prioritizes education, treatment, rehabilitation and healing.