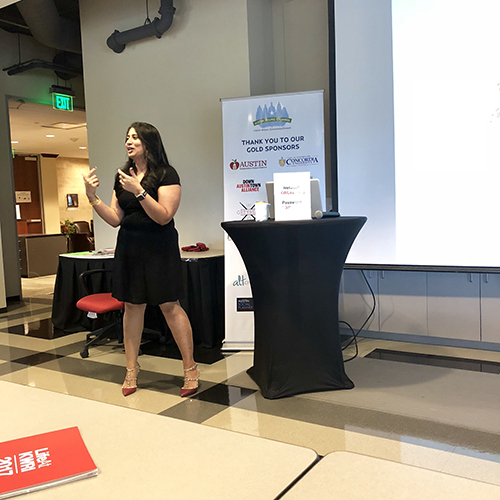 The Austin Young Chamber was honored to have Sujata Ajmera speak at our August Speaker Series event last Wednesday. Specializing in Immigration & Nationality Law, Sujata is the first Indian-American female law partner in Austin and is the recipient of the 2018 Austin Under 40 Austinite of the Year Award.

Ajmera’s parents immigrated from India for graduate school and later settled in the South. While living in Baton Rouge, Louisiana, Sujata was well-aware that she was different—her family and neighborhood friends spoke a different language, practiced a different religion, and ate different food. Understanding cultural differences from an early age, Sujata shared two key points on what she believes encouraged her success in the workplace.

First off, be yourself.

Sujata explained that she owes her first pivotal moment in celebrating her differences to a classmate in her middle school creative writing class. Throughout Sujata’s time in school, she admits that she never corrected anyone for mispronouncing her name. Sujata describes that it was easier to let her peers do the best they could. However, when Sujata’s classmate questioned her about it, Sujata started asking herself, “Why am I afraid of being different?” Even though she was tempted to conform to what was “normal,” Sujata finally understood that there was no issue in being different. In fact, Sujata started using her differences as an asset, which helped her gain more pride in herself. For example, whenever Sujata attended religious holidays, instead of hiding her differences, she openly talked about them to her friends and even invited them to join. This openness benefited Sujata socially and professionally and built her reputation of being genuine and honest both in and out of the workplace.

Halfway through her career, Sujata realized that her work had become a toxic environment. When her colleagues invited her to join them at a new law firm, she made the leap and once again felt happy and comfortable in the workplace. From this experience, Sujata learned “as you climb, lift.” In other words, we each have the opportunity to invite others on our journey to success, and we should. Sujata also found this to be true through her board volunteer service. By sitting on boards of different organizations, Sujata had the opportunity to make several connections, meet different people and even sharpen her own management skills – such as finances and how organizations run. In both a professional and volunteer capacity, Sujata was able to find her passions, cultivate relationships, and give back.

Many thanks to Sujata Ajmera for speaking at our August Speaker Series. Join us for our September Speaker Series featuring Tracy King, VP of Public Affairs at AT&T.