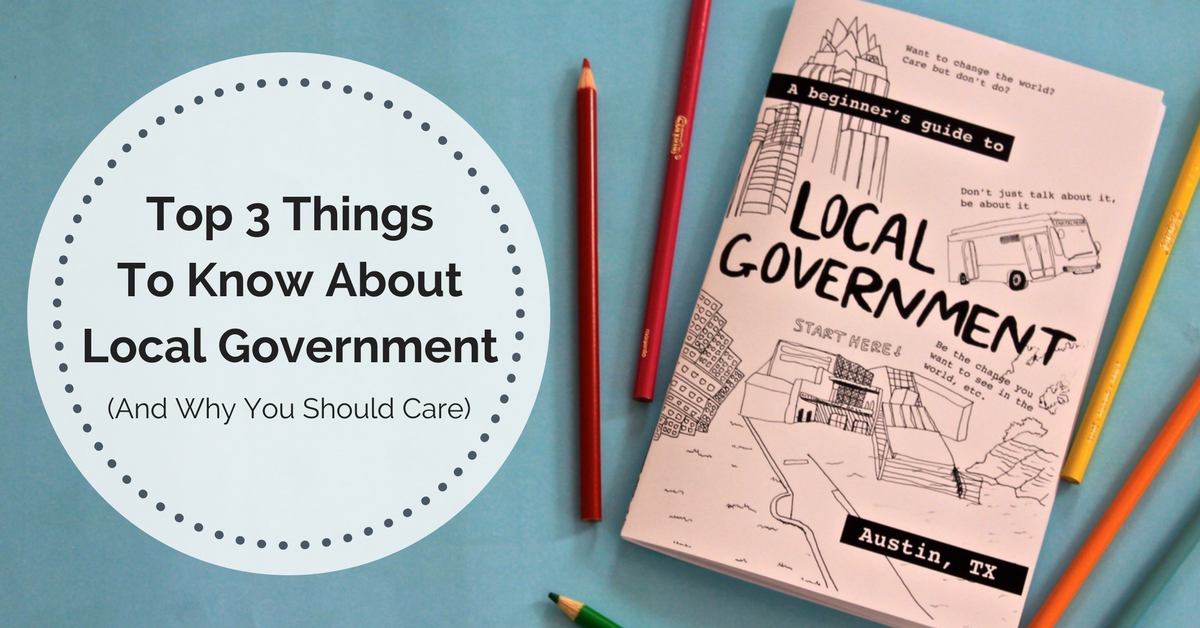 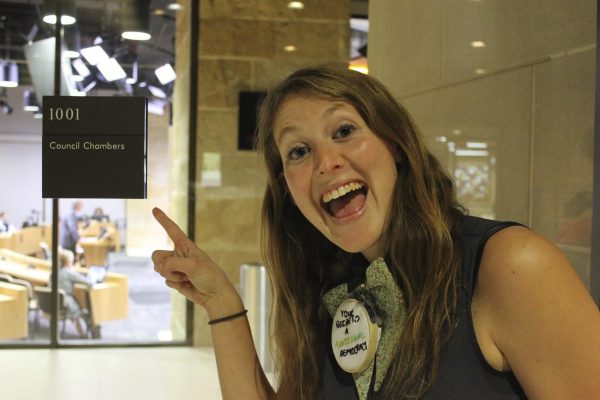 Flashback to college. Shitty beer. Greasy pizza. And a lot of caffeine.

I went to Temple University, a large public school in northeast Philadelphia. When I was a sophomore or junior, our state’s governor announced plans to cut funding to all of Pennsylvania’s major universities, triggering tuition increases for literally hundreds of thousands of students.

At the time, I was stealing toilet paper from campus in order to save money… so the idea of paying thousands of more dollars for school obviously alarmed me.

That’s why I was happy to hear that my school was organizing a lobby day at our state’s capital in Harrisburg. They rented nearly a dozen buses, ordered a bunch of t-shirts, and promised free lunch to any student who would come along and advocate for ourselves and the university to our state leaders.

That morning I woke up feeling pumped and ready to get sh**t done at the state capital, a feeling that quickly dissipated when I arrived at the meeting spot on campus and discovered that less than 20 students had showed up (out of more than 33,000 students). The university (which was already strapped for cash) had to send away all but one of the buses and was left with hundreds of uneaten boxed lunches.

In the end, the budget cuts went through and all of our tuition went up.

Yes, this story is a bit of a bummer.

But don’t worry, here’s where things get good. Because that whole experience changed everything for me. It got me fired up about political participation. It showed me the importance of getting involved in your local and state government institutions. It basically made me a civic nerd overnight.

Flash forward to today and that passion has never dulled. That’s why today I’m happy to share with you all some tips for getting involved in local government and making a difference right here in Austin.

Because the truth is, this is our city. It’s future is in our hands. And if we don’t pay attention to what’s happening within it, who will?

So here it is – my list of the top three things you should know about local government…. And how you can get involved.

This might seem like an easy one, but the truth is, the majority of Austinites are pretty isolated from our local government system. In fact, in our last mayoral election, 85 percent of eligible Austinites did not cast a ballot.

Let that sink in for a moment. Our current mayor was elected with just over 52,000 votes, in a city with nearly one million residents.

So who is the mayor anyway? It’s this guy. Steve Adler 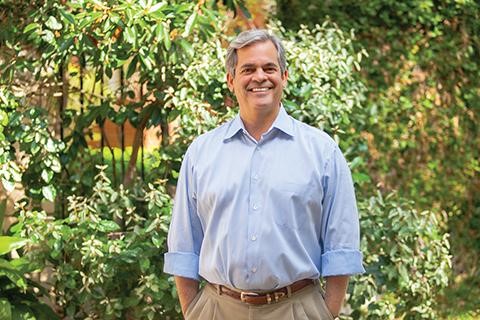 And what does he do?

2. Which City Council district you live in. 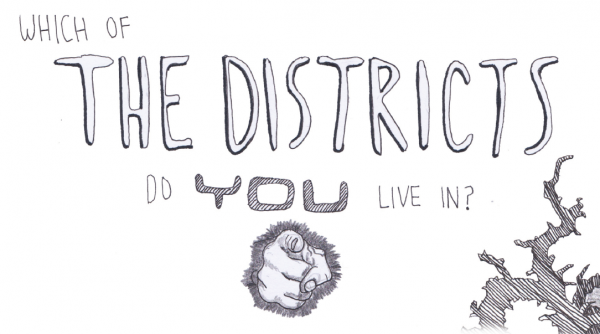 The City of Austin is divided into 10 City Council districts, each with about 80,000 people. The districts are meant to provide increased geographic and minority representation on City Council. 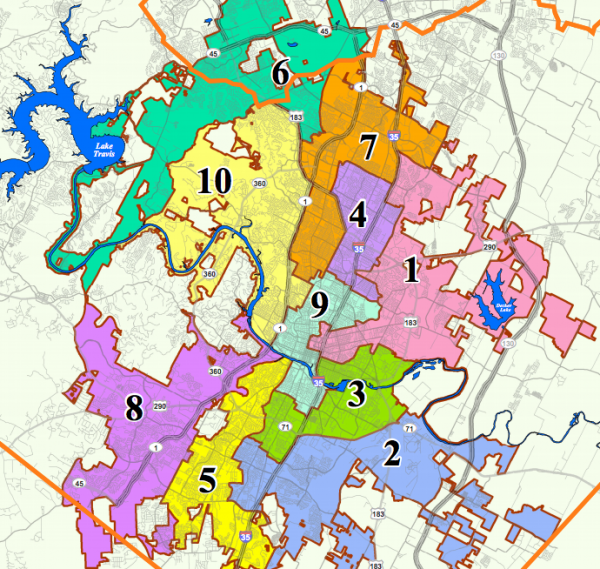 So how do you figure out which district you live in? All you have to do is click this link and scroll down the page until you find the “District Lookup” button. Type in your address, press enter, and your City Council district will appear.

3. Who your City Council person is.

Now that you know which district you live in, take a look at the picture below and find the City Council person who matches up.

Try and remember what they look like. This is the person who represents you at City Hall. This is your representative. This is your point of contact when you want to get something done in your community.

And the best part is… they’re actually accessible.

What are the chances you’re going to run into Donald Trump at the grocery store? Or into Ted Cruz at your gym? Because your City Council person actually lives in your neighborhood (and represents far less people than the president or a US senator), you have a good opportunity to get to know them… and that can make all the difference when it comes to turning your passions into city policy. 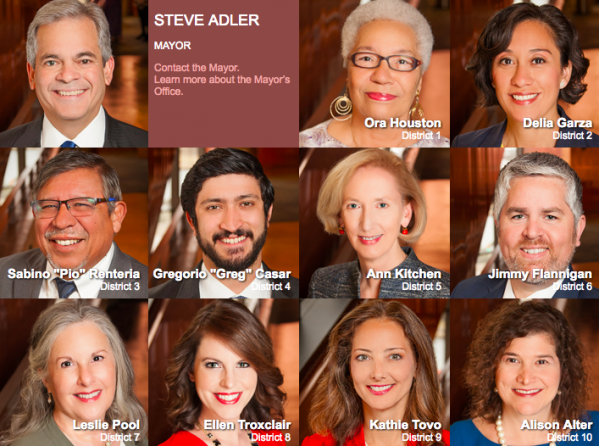 So what does City Council actually do?
City Council is essentially Austin’s lawmaking body. They create city rules, ordinances, and policies, which are then carried out by the City of Austin’s thousands of employees.

For example, in 2017, Austin City Council voted to set a goal that by 2027, our city’s electric utility (and by extension, all of us) will get 65 percent of its energy from renewable sources, like wind and solar.

It is also City Council’s responsibility to look into possible city-owned locations for a new MLS soccer stadium in Austin.

So what do you do with all of this information?

Here are a few first steps for actually getting involved in local government. 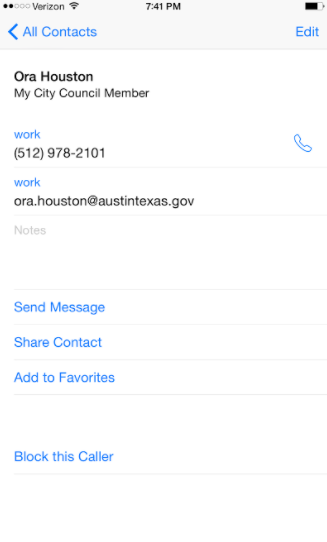 2. Make the pledge to attend a City Council meeting.

So what are you waiting for? Pick a meeting that fits your schedule, find a friend that wants to join you, and make an evening out of it! Stop by City Hall around 6:30pm to observe the meeting for half an hour and then grab dinner at a new restaurant downtown you’ve never tried before. Civic engagement does not have to be boring!

PS – City Hall does validate parking. The entrance to the garage is on Guadalupe Street. 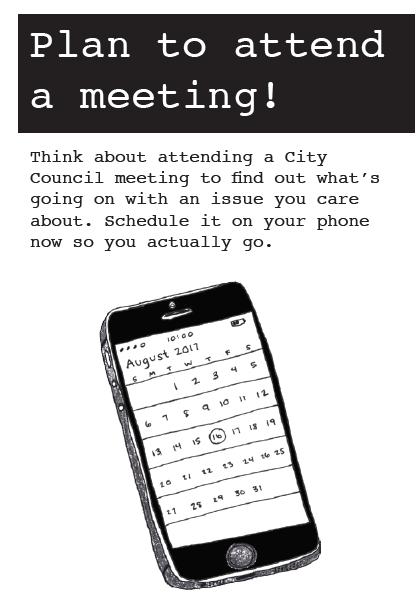 3. Get a copy of “A Beginner’s Guide To Local Government: Austin Edition.” 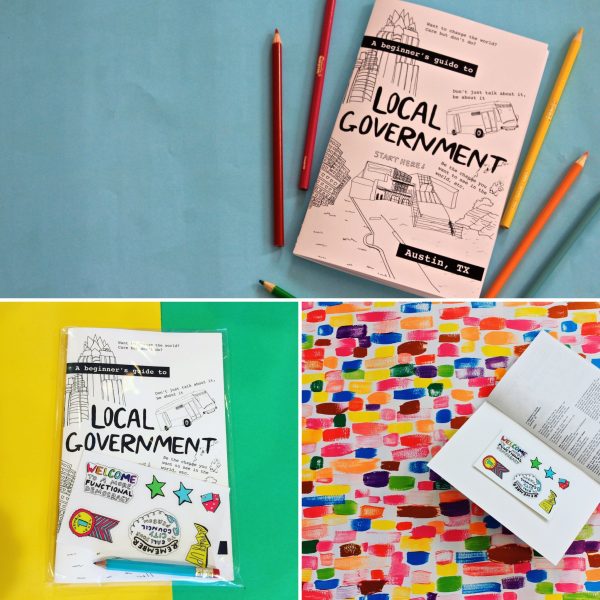 Yes, I’m such a civics nerd that I literally wrote a book on the topic. Together with a team of amazing local female artists (Hal Wuertz and Jordan Shade), I’ve spent the last year bootstrapping this project and am so excited that it’s now available to the public via a Kickstarter campaign. There is still a week left for you to contribute and get your very own copy of “A Beginner’s Guide To Local Government.” The interactive workbook walks you through everything you need to know to become a changemaker in your community. Oh, and it comes with stickers 🙂

And one last shameless plug for AYC – This is a project that I’ve been working on in my spare time in a friend’s garage for over a year. Because of its grassroots nature, it’s also something I could never have achieved without support from both AYC staff and its members. Earlier this year, I won a game-changing $1,000 grant from Biz Box, which AYC nominated me for. I have also received a countless amount of support from my always impressive and supportive fellow AYC members. So to everyone who has helped make this project a reality so far, thank you!

And if local politics are your jam, consider joining AYC’s Economic Development Committee. Each month the committee discusses the big issues facing Austin and provides opportunities for young professionals to get involved. The meetings are held the fourth Wednesday of each month at 6:30pm at WeWork University Park.

About Amy – Amy is the co-author of “A Beginner’s Guide To Local Government,” an activity book that teaches millennials how to get involved in local government. She is also the former chair of AYC’s Economic Development Committee.