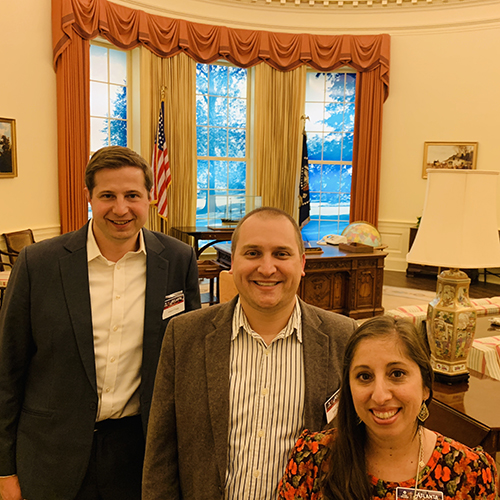 Every year the Austin Chamber sends a delegation of city and regional leaders to a different city to learn from their best practices. This year, a record 113 people visited Atlanta, Georgia including three Austin Young Chamber leaders.

Austin Young Chamber Executive Director, Alyssia Woods along with Immediate Past Chair of the Board, Adam Flagg and current Chair, Billy Moyer were among those delegates on this years trip.

“It was an honor to represent the Austin Young Chamber on this important trip to Atlanta,” Billy Moyer said. “This is a great learning experience for Austin and it is important that as younger leaders, that we are well represented so that we can bring that knowledge back to our community and continue to work towards positive change in our great city.”

The trip started off with the delegation taking the train from the Atlanta airport to downtown – Yea we aren’t lying. In Atlanta, they have a train from the airport. The first stop was the Atlanta Metro Chamber where their CEO spoke about Atlanta’s vision and priorities.

Then the delegates headed by bus to The Center for Civil and Human Rights for a tour. Many in the group had the emotional experience of a peaceful protestor simulation that led to a lot of vulnerable conversations.

The former Mayor of Atlanta, Shirley Franklin spoke at the center about equity. She was the first female Mayor of Atlanta and continues to serve the region in various ways. She talked about how we often put limitations on ourselves and then allow others to add to those limitations. She also talked about how immigrants to America often are successful because they see the upside in our country whereas many of us who were born here, too often only see the negative. She ended her presentation with this question that really resonated with delegates: “Can America continue to be great for the next 100 years if we leave 20 percent of people behind?”

The day ended with dinner at Mercedes-Benz Stadium and a session from the Arthur M. Blank Foundation about reducing displacement and improving affordability.

The second day was packed full of great speakers and visits around the Atlanta region. Topics that were discussed were affordability, mobility and innovation, all quite relevant to the Austin region. Economic Development leaders from multiple counties and the state of Georgia talked about how they collaborate for success. This was also very relevant for Austin and something that young professionals should push to see more of in our city and region.

The highlight for many on the trip was Georgia Gwinnett College, where their founding President and current President both spoke. The college was started in 2006 with just 118 students and in 2018 they have nearly 13,000. They do not require the SAT. They have no tenure for professors, no department heads. They started with a blank slate and have challenged college and university norms from the beginning. The day ended with a tour and dinner at the Jimmy Carter Presidential Library.

The last day included a visit to Drew Charter School and sessions from the Atlanta Public Schools Superintendent (who was at Austin ISD prior) and the CEO of Purpose Built Communities who have implemented a cradle to college pipeline in the region that is expanding throughout the country.

The trip ended with a visit to Emory University to learn about Public-Private Partnerships. These types of partnerships are prevalent in Atlanta and seem to be a reason for their continued success. This is something else that Austin could do better.

The Austin Young Chamber leaders learned a lot from this experience and looks forward to sending leaders on future Intercity trips.

One of the best quotes that was heard from leaders in Atlanta was, “If you are not at the table, you are on the menu.” This is extremely relevant to young professional leaders and is one of the reasons that the Young Chamber exists. Young professionals need to continue to fight for a seat at the table to ensure that Austin’s future is bright.

If we do not get that seat at the table, our generation will be on the menu for years to come and we better be prepared to get served.