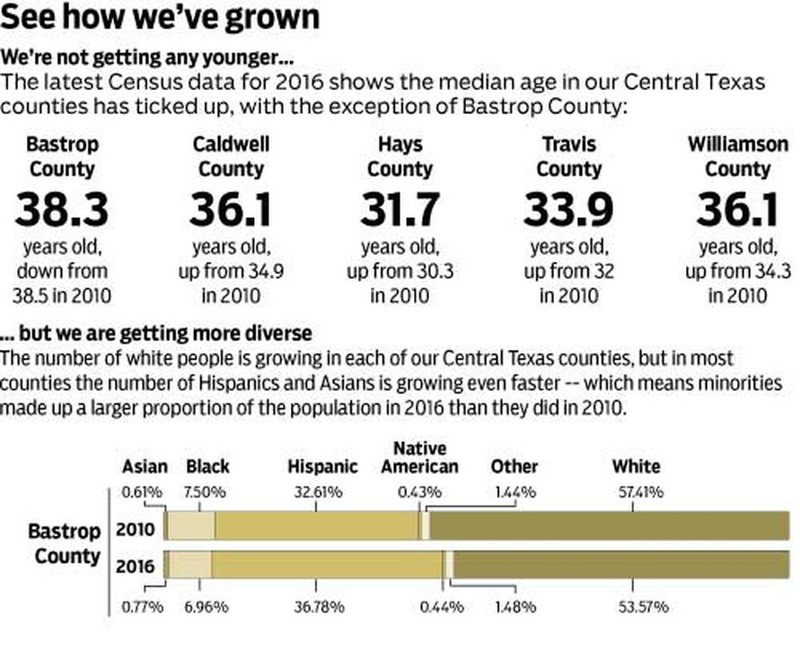 This content is provided by Statesman and was originally posted on June 22, 2017.

Gilbert Cervantes remembers his Hispanic classmates well. There were only eight of them when he graduated from Bastrop High School in 1967. Two of them were his cousins.

“There weren’t many Hispanic students then,” he said. “Most were white. We had some Black students because Bastrop schools integrated my senior year.”

“No,” Cervantes told him.

Fast forward to 2017, Bastrop school district’s population is made up by 64 percent Hispanic students. And Spanish isn’t banned at school.

According to recently released Census data measuring the county’s 2016 population, Hispanics account for nearly 37 percent of the population, up from nearly 33 percent in 2010.

But with the county’s younger population, data show the Hispanic population growing at a larger pace. Hispanic millennials have make up 44 percent of the county’s population. By comparison, residents aged between 20-34 are made up by 45 percent white, 8 percent black and 1 percent Asian.

As the greater Austin area continues to experience sprawl and more people are priced out of the urban core, outlying suburbs like Bastrop County will capture more of the overall growth, said Ryan Robinson, Austin’s city demographer. That often affects minorities who tend to skew lower income, he said.

Bastrop County has many of the same features that have fueled the 40.7 percent growth in Hispanics in Hays County from 2010-16. Robinson noted such suburban counties are “a good fit for the surging Hispanic middle class in Central Texas: lots of reasonably priced housing, good schools and pretty good access to Travis County and the employment core of the metro area.”

Cervantes, who on two hands could count his Hispanic class mates in 1967 said he’s noticed the uptick in in that population but wonders if its reflected in leadership positions at local government.

Currently, no Hispanics serve on the Bastrop and Smithville city councils, Bastrop school board or Bastrop County Commissioners Court.

“We need to get qualified (Hispanics) in leadership positions,” he said. “The only way we’re going to get that done is through education. Kids have to get an education.”

The number of white people in Central Texas counties is still going up too, but in most counties the number of Hispanic and Asian people is growing even faster.

Hays County had the second-fastest-growing Hispanic population in the state from 2010 to 2016, among counties with at least 50,000 people.

The county, which saw a 40.7 percent surge in Hispanics over those years, was beat out only by Randall County near Amarillo. Also making the top 10 were Comal County (34.47 percent growth among Hispanics) and Williamson County (30.24 percent).

“It’s not hard to see the diversity and changes in Austin,” said Matt Glazer, executive director of the Austin Young Chamber of Commerce. “Companies have an opportunity now to be on the cutting edge (by hiring a diverse workforce).” He said he hopes that businesses respond to these trends.